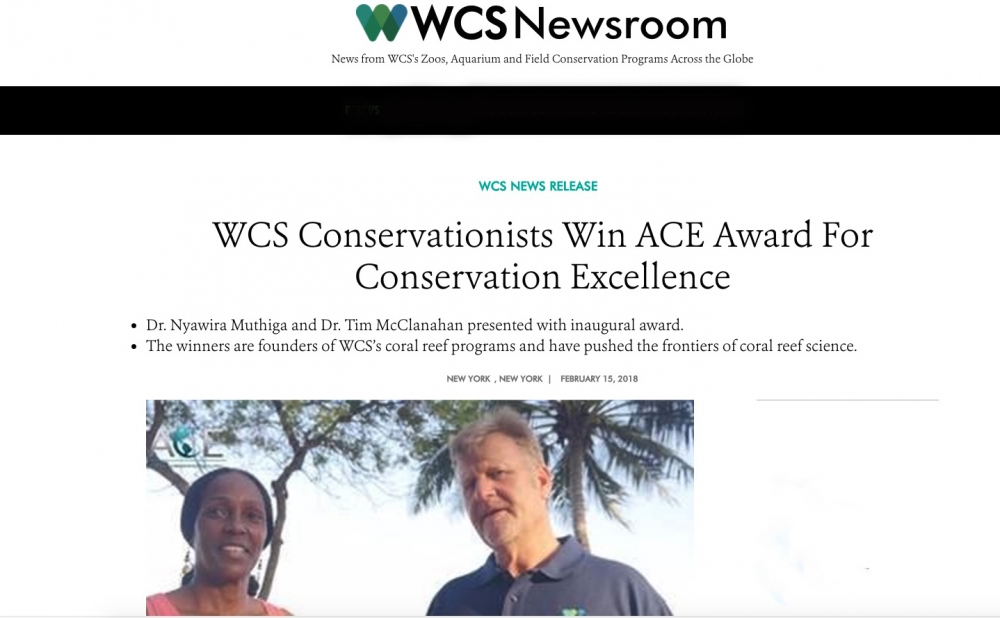 WCS is pleased to announce that two of its conservationists, Dr. Nyawira Muthiga and Dr.Tim McClanahan, have been awarded the 2018 Award for Conservation Excellence (ACE). Drs. Muthiga and McClanahan were nominated together as one finalist.

The Award for Conservation Excellence (ACE) was created to recognize the extraordinary contributions made to wildlife conservation by the world’s leading scientists. Along with the other four finalists—Dr. Joel Berger and Dr. Ullas Karanth, both of WCS, Dr. George Archibald, and Dr. David Macdonald—Muthiga and McClanahan were selected from over 40 applicants.

The award was presented by The Banovich Wildscapes Foundation, which fosters cooperative efforts to conserve the Earth's wildlife and wild places. It was founded in 2007 by artist John Banovich, an American oil painter known internationally for his portrayals of wildlife.

The ACE recipients were named and presented with the first ACE at a premier awards ceremony during the Southeastern Wildlife Exposition last night (February 14) at the Gaillard Center in Charleston, S.C.

“We are honored to have four of WCS’s conservationists named as finalists for the Award for Conservation Excellence,” said Dr. John Robinson, Executive Vice President of Conservation and Science at WCS. “We are especially pleased that decades of important work on coral reefs and fisheries by Nyawira and Tim have resulted in an ACE award. The prize is a well-deserved one for such inspirational conservation leaders.

Dr. Tim McClanahan and Dr. Nyawira Muthiga are coral reef ecologists and conservationists who have worked in coastal Kenya, East Africa, the Western Indian Ocean and around the world for more than 30 years.  They were founders of WCS’s Coral Reef programs and catalyzed the development of coral reef research and conservation programs in Kenya, Belize, Madagascar, Papua New Guinea, Indonesia, and Fiji, and smaller more temporary field programs in other countries, including Tanzania and Mozambique.

They have pushed the frontiers of coral reef science and understanding key management needs for developing sustainable relationships between people and coral reefs. Their years of study have uncovered the natural and human disturbances that impact reef fish and habitats and the rates of recovery under different fisheries management systems. As leading coral reef scientists, they have published more than 300 peer-reviewed publications, comprising influential studies on the impacts of fishing and the alteration of ecological food webs, tourism, sedimentation, climate change and coral bleaching, and the importance of managing gears for sustainable fishing and marine parks for conservation.

To achieve meaningful and enduring conservation, Tim and Nyawira work closely with local communities to implement agreeable conservation solutions that build the capacity for co-management by strengthening the adaptive capacity of local governance, decision-making and increasing incomes of fishers by understanding of social, economic, and ecological processes. In addition to sitting on numerous national and regional conservation boards, their mentorship and leadership have shaped the careers of dozens of local scientists and international scholars, with a particular emphasis on mentoring students and managers in the applied marine sciences and management of Western Indian Ocean coral reefs.

MISSION: WCS saves wildlife and wild places worldwide through science, conservation action, education, and inspiring people to value nature. To achieve our mission, WCS, based at the Bronx Zoo, harnesses the power of its Global Conservation Program in nearly 60 nations and in all the world’s oceans and its five wildlife parks in New York City, visited by 4 million people annually. WCS combines its expertise in the field, zoos, and aquarium to achieve its conservation mission. Visit: newsroom.wcs.org. Follow: @WCSNewsroom. For more information: +1 (347) 840-1242.

The Mission of ACE is to honor and appreciate a legacy of conservation through recognition of men and women who share their passion to conserve the great outdoors, and have made extraordinary contributions to the sustainability of nature and wildlife. The Award will recognize a conservationist’s long-term commitment to making our planet a better place, and empower people in both local and international communities to advance wildlife conservation.