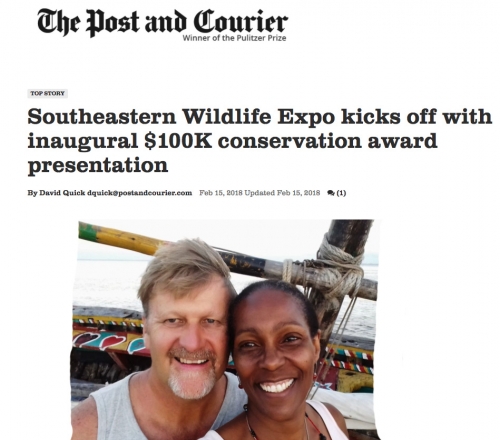 The Post and Courier-Timothy McClanahan and Nyawira Muthiga, founders of the Wildlife Conservation Society’s coral reef program, won the first Award for Conservation Excellence, or ACE.

At the kickoff of the 36th Southeastern Wildlife Exposition on Wednesday, a new award that is hoped to become “the Oscars for conservation” was given to a duo that have devoted three decades to coral reef conservation.

Timothy McClanahan and Nyawira Muthiga, founders of the Wildlife Conservation Society’s coral reef program, won the first Award for Conservation Excellence, or ACE. The award carries a cash prize of $100,000, as well as a $5,000 Cabela’s gift certificate.  McClanahan and Muthiga have worked in an array of locations, from east Africa to Belize and Indonesia, developing coral reef research and conservation programs. McClanahan and Muthiga said the prize money will come in handy in the work they are doing with coral reef conservation. “We work with poor people on a daily basis and always trying to find a balance,” said McClanahan. Muthiga said finding funding in east Africa is often a challenge and the prize money is badly needed.

Beyond the finalists and the Cabela’s family, others at the event included Interior Secretary Ryan Zinke, comedian Jeff Foxworthy, celebrity zookeeper Jack Hanna, conservationist Ivan Carter, National Rifle Association President Wayne LaPierre and astronaut Charlie Duke. John Powell, Southeastern Wildlife Expo executive director, said the event is honored to be the host for the ACE Awards. “It’s exceptional to have all these conservationists from around the world under one roof for one night,” he said.

The award is the brainchild of artist John Banovich of the Banovich Wildscapes Foundation and was sponsored by the Cabela Family Foundation, Cabela’s Outdoor Fund and Bass Pro Shops. Banovich said the award stems from his interaction with “conservation heroes” in the 30 years of his travels around the globe in pursuit of his art. “As I’ve traveled all over all these decades, studying my own animals, I realized these are amazing people,” said Banovich. “About a decade ago, I was thinking there needed to be an Oscar-scale acknowledgment where the world says thank you for all you do for wildlife and wild places.” About three years ago, Banovich approached Cabela’s, a national hunting, fishing and camping goods outfitter, about funding the award and they agreed. He hopes to find more backers in the future and expand the biennial prize to $250,000 in 2020 and $500,000 in 2022. Besides honoring people who have made a significant impact, Banovich sees another purpose for it, notably bringing together “the left and right of the conservation arena,” from sportsmen and zoos to universities, non-government organizations and environmentalists. Noting the current human population of 7.6 billion and the projection of 11.2 billion humans in 2100, Banovich said all must come together to save wildlife and natural places, notably by providing economic incentives for people in developing countries to save wildlife and habitat. “We need to bring the left and the right of the conservation arena together: sportsmen, zoos, museums, NGO (non-governmental organizations), universities and non-hunting conservationists,” said Banovich, noting that the illegal shooting of Cecil the Lion in 2015 in Zimbabwe “exposed the chasm between sportsman conservationists and non-hunting environmentalists.”

“If we want a future with wildlife, we have to come together — united we stand, divided we fall,” said Banovich.