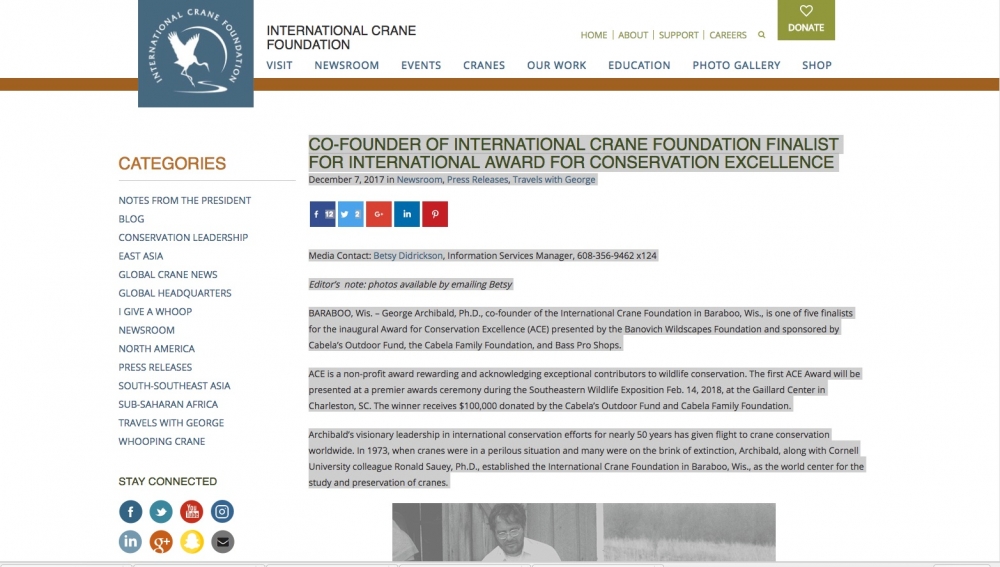 BARABOO, Wis. – George Archibald, Ph.D., co-founder of the International Crane Foundation in Baraboo, Wis., is one of five finalists for the inaugural Award for Conservation Excellence (ACE) presented by the Banovich Wildscapes Foundation and sponsored by Cabela’s Outdoor Fund, the Cabela Family Foundation, and Bass Pro Shops.

ACE is a non-profit award rewarding and acknowledging exceptional contributors to wildlife conservation. The first ACE Award will be presented at a premier awards ceremony during the Southeastern Wildlife Exposition Feb. 14, 2018, at the Gaillard Center in Charleston, SC. The winner receives $100,000 donated by the Cabela’s Outdoor Fund and Cabela Family Foundation.

Archibald’s visionary leadership in international conservation efforts for nearly 50 years has given flight to crane conservation worldwide. In 1973, when cranes were in a perilous situation and many were on the brink of extinction, Archibald, along with Cornell University colleague Ronald Sauey, Ph.D., established the International Crane Foundation in Baraboo, Wis., as the world center for the study and preservation of cranes.

In the early 1980s, there were less than 30 Whooping Cranes in captivity. George petitioned to transfer a female Whooping Crane named Tex from the San Antonio Zoo to our headquarters. Our colleagues had been unable to breed Tex, who was hopelessly imprinted on people. George spent countless hours with Tex forming a pair bond so that she would be prepared to lay an egg. The result was a precious chick named Gee Whiz, who now has great grandchicks in the wild! Click here to watch our video George and Tex.

Early on, Archibald pioneered innovative breeding techniques that allowed many rare crane species to reproduce in captivity for the first time. He forged scientific exchanges and field conservation programs in the 1970s with Chinese and Russian biologists in an era when it was a rare occurrence for a western scientist. Archibald is renowned for his energy, optimism and stimulating new ways of thinking about seemingly intractable problems.

He leverages the charisma of cranes to unite people from diverse cultures and backgrounds to work together to solve problems facing our fragile planet. He has recruited, inspired and mentored countless individuals worldwide in the name of cranes. By focusing on the magic of cranes, people eagerly engage in the protection and restoration of entire ecosystems.

Under Archibald’s leadership, the International Crane Foundation grew into a highly respected organization, successfully promoting crane and habitat conservation around the world. Today, the International Crane Foundation has more than 50 employees and supports conservation projects on five continents and in more than 50 countries.

Archibald is a true conservation ambassador who uses his unique brand of crane diplomacy to work in sensitive places. He leverages the charisma of cranes to unite people from diverse cultures and countries to work together to preserve the landscapes necessary for the survival of both cranes and people.

The mission of ACE is to honor and appreciate a legacy of conservation through recognition of men and women who share their passion to conserve the great outdoors and have made extraordinary contributions to the sustainability of nature and wildlife. The award recognizes a conservationist’s long-term commitment to making our planet a better place, and empower people in both local and international communities to advance wildlife conservation.